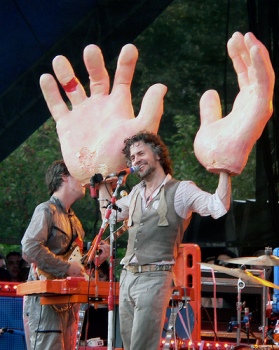 … by adding a deactivated frag grenade to his carry on luggage.

Apparently, Coyne, the lead singer for the Flaming Lips, took the grenade, a party decoration which was gutted and painted gold, and nonchalantly tossed it in his bag. Of course, when the bag went through security at Will Rogers Airport, alarms went off and the terminal was shutdown until it was determined that the grenade was harmless.

You might know Coyne as the mastermind behind “7 Skies H3“, the Lips’ 24-hour-long song, or the Gummy Song Skull/Fetus releases, where USB drives containing mp3s were encased in an edible gummy brain and fetus, respectively. The band is also known to be active on Twitter, where they’ve made a common practice of actually conversing with their fans, and at least once appearing at one’s house party for an impromptu performance. These past events might lead one to believe that the grenade debacle was part of another stunt, but according to Coyne, it wasn’t at all.

The singer took back to his Twitter account to say, “Sorry Sorry Sorry!! Everyone that was inconvenienced because of my grenade at OKC airport!!” — a line that sounds uncannily like just another non-sequitor in Coyne’s standard on-stage banter.