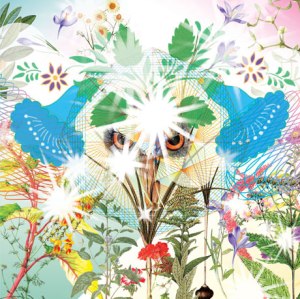 It took a long while, but after years of treating the music of my Indonesian background as little more than a curiosity, I’ve finally started to see how great it can be. I no longer say words like “dangdut” or “kroncong” with a grimace. (Now it’s more of a beaming smirk.)

As far as Japanese noise experiments go, I’m pretty unversed. Appreciative, but unversed. But when OOIOO‘s new album dropped with the title Gamel — as in “gamelan,” the traditional Javanese percussion orchestral ensembles — my eyes lit up. To me, gamelan music is like the bagpipes of southeast Asia. Ugly and annoying, but a sacred link to the past, and a fixture at ceremonies where people wear too many layers of clothing for a tropical third-world country. No one listens to gamelan music by choice unless they’re smug assholes looking to make a point.

Gamel, on the other hand, sounds organic considering its mix of gamelan, Noh and noisy guitar freakouts. The interplay is great: the tones of both gamelan and guitars sound microtonally unstable, and the Noh-ish vocals carry their signature peculiarity. The whole thing shifts from creepy and quiet to breakneck and fragile at the bang of a gong.

You can check out the lead single “Jesso Testa” below via Soundcloud, but if you get a chance to listen to “Gamel Ninna Yama,” definitely do so. It even features a bit of Balinese kecak, which is always an otherworldly listening experience.