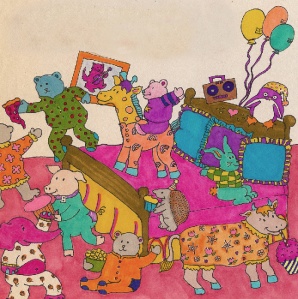 You might remember the day that I vomited links all over your computer speakers. At least 23 readers reported short circuits caused by whatever gastric robo-fluid spewed forth from the miniature speaker cones. I’m almost positive that at least one person tried playing everything in the post all at once, which resulted in a laptop that kept scrubbing and kept turning the hot water but still… couldn’t… get… clean. Poor lappy.

One of the culprits was a new EP from Jerry Paper, International Man of Misery, which was the follow-up to 2012’s Vol. I, which I loved more than watching incompetent drivers trying to parallel park. Yes, it was that good.

The problem, though, was that IMM was a passable effort, but it threw too many curveballs. The mall muzak drum machines were great, and the lyrical cadence just as good as anything else on Vol. I, but the concept/theme of “sad things” was too direct. I found myself getting bored — and not in the spacey way that made Vol. I an intriguing listen.

Fuzzy Logic solves this problem. The new full-length kicks off with strong notes of Eno monotony and the familiar keyboard flutter. “Bionic People” is only the second track on the record, but already, the blending of Vol. I‘s slow drawl with IMM‘s warped tropicalia-lite is coming on strong. The rest of the album is more of the same medulla-melting chord progressions, but brings with it more variety and a substantial heft — one of the few things that might have been missing from Jerry Paper’s previous work.

You can stream Fuzzy Logic below, or name your price for the digital download via Bandcamp. There’s also a limited edition cassette available on, because who wouldn’t want to hear analog sounds on an analog format?