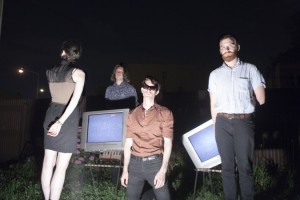 Filled with noise but never hiding behind it, Pop. 1280 is a band that channels their sound through the weirdo aesthetics of other Sacred Bones acts but roots it through the punchy tones befitting old Wax Trax releases. There are a plethora of words and phrases I use to describe the band’s sound, including, but not limited to: “death shuffle”, “garbage stomp” and “unholy soapbox gospel”.

The band also seems to have a extra weird streak in their practice, sending a promo video to the Sacred Bones office on an envelope with no return address that contained a CD-R and human hair. The video itself is also a fairly strange combination of bomb shelter confessional and ransom tape. “Human Probe” was released as a free download last week and is streamed below via Soundcloud, and the group has also streamed the whole of Imps of Perversion on Pitchfork Advance, available to listen to here. The official album release date is August 6.