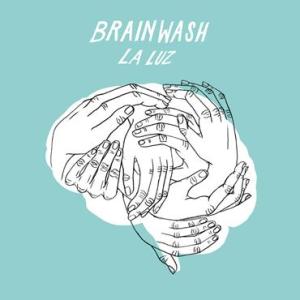 Does it surprise anyone anymore that surf rock is still around after half a century? When well-executed, it appeases even the most hardened, arm-crossed, no-dancing concert goer. Why? Because it’s a no-nonsense, slightly frilly pop dream, written from a formula that works and hasn’t changed since a time when the best defense against bug bites was a spritz of DDT and you were expected to hide under a desk from the next atom bomb.

If it sounds like a backhanded compliment, it is. There’s no innovation here. But I’ll be damned if I don’t thoroughly enjoy it.

La Luz, four ladies that hail from Seattle, just premiered their new 7″ single on Suicide Squeeze, and it proves these girls have been putting their record players to good use. The A-side, “Brainwash,” hums with a church organ and a shuffle-step beat, and the B-side, is a surf instrumental. Derivative as hell, no matter what any PR agent might say, but fucking great nonetheless. Check out both tracks below.