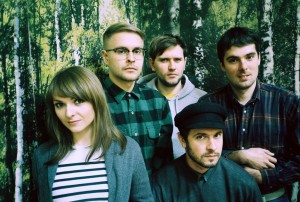 The group, a five-piece from Rostov-on-Don, are released their sophomore record Calendar on Talitres and the single, “To the South,” just made its US debut. It sounds great — like a hybrid of 90s Scandinavian indie pop and 80s Manchester post-punk. The group is also going on a European/western Russian tour. Check out “To the South” below.