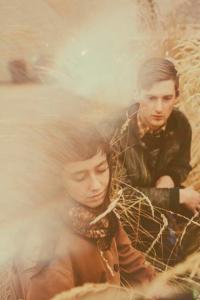 “Reaction II” is the name of Blue Hawaii‘s latest single from their sophomore album Untogether, out now on Arbutus, and the theme in general is VHS dream world. To be honest, the idea of a “waking dream,” as romantic and as it seems, is kind of terrifying. Think about the random jump cuts, the naked auditorium speeches, the sudden inability to run or jump or speak. It would be like living in a David Lynch movie, which probably wouldn’t help anyone with any anxiety issues.

The Montreal duo has a grasp on what it might sound like to be constantly dreaming, splicing vocal samples and laying on a blanket of ebbing synths. The video also captures the idea pretty, with the “dreamer” wandering around wistfully on concrete plazas and in trees. Bonus points also awarded for geometric cut scenes.